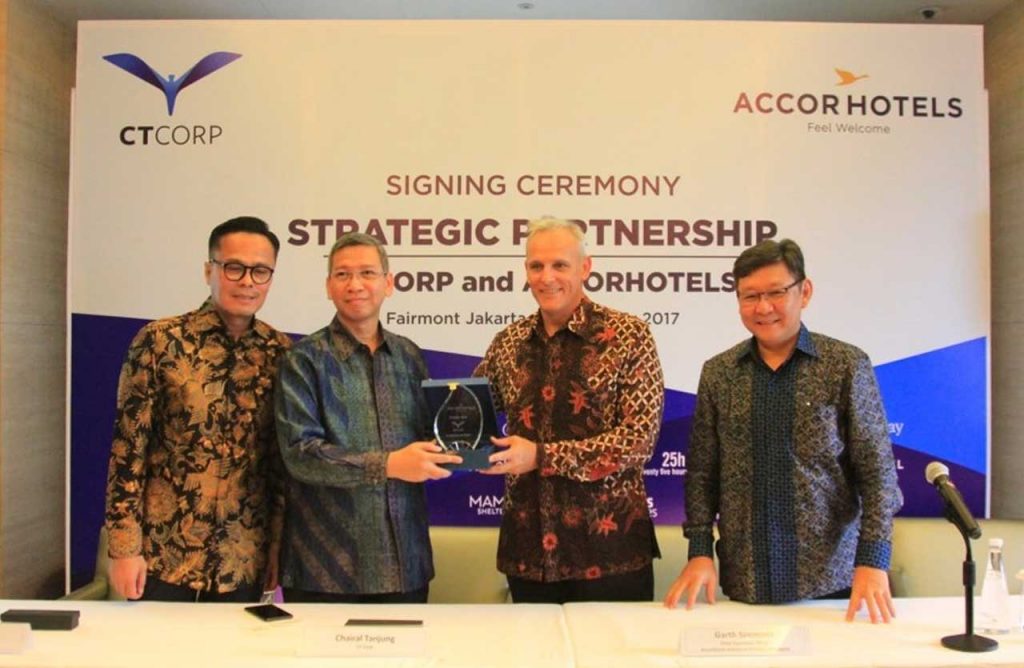 AccorHotel Group has entered into a cooperative agreement with The Indonesia CT Corporation to build 30 new hotels across Indonesia. Both parties signed a Memorandum of Understanding (MoU) together at the Fairmont Hotel in Jakarta on Thursday, 9th November 2017.

“In recent discussions we have agreed on a strategic partnership. We will open 30 new hotels,” confirmed Chairal Tanjung, former National Coordinating Minister for the Economy, who was also present. “We could not find a better operator of chain hotels than AccorHotels”, said Chairal. “AccorHotels is a well-known group of hotels and CT Corporation is a well-known lifestyle company. Our shared desire benefits all parties,” he continued.

The MoU between Accor Hotels and CT Corporation is indicative of the commitment by Indonesia’s Government to increase the number of annual foreign tourism arrivals to the country. Last year, the government announced its overall target of 20 million annual inbound tourists by 2019.

In addition to its support for new hotels projects, the government is also launching various infrastructure initiatives in support of tourism, particularly around areas such as Lake Toba, Labuan Bajo and Lombok, which have all been earmarked for accelerated development.

The 30 new hotels promised by AccorHotel Group and CT Corporation are expected to add at least 6,000 more rooms to Indonesia’s accommodation provision for foreign tourists. Plans are already underway to develop mid-range and budget hotels with AccorHotels, whilst further enhancing the luxury properties operated by Trans Hotels.