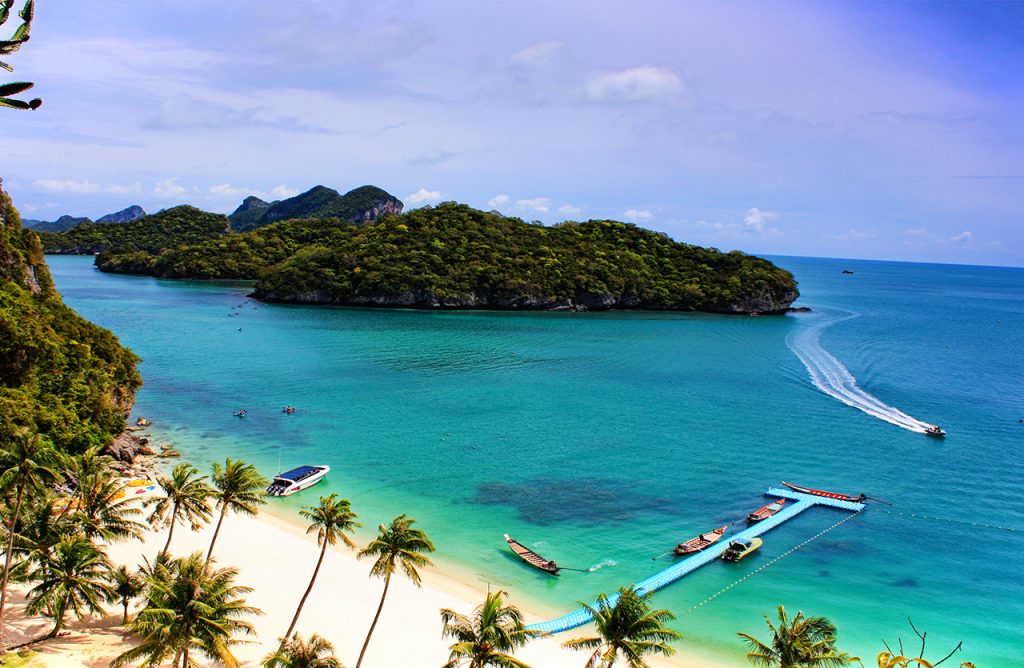 Following the recent news that Thailand’s iconic Maya Bay will remain closed for at least another two years, holidaymakers in the Land of Smiles have begun to look for alternative destinations. One such location that’s making waves in the Thai tourism scene is Mu Ko Ang Thong National Park in the Gulf of Thailand.

Established as a marine national park in 1980, Mu Ko Ang Thong National Park is an archipelago of 42 islands covering 102 kmÂ² just off the shores of the Surat Thai Province in the Gulf of Thailand. Although relatively unchartered by international tourism, the park has long had a reputation as one of the jewels in Thailand’s southern island chain – the name Ang Thong means “golden basin” in Thai.

The park is home to steep limestone hills, sinkholes, viewpoints, caves and inland marine lakes, perfect for exploration by boat. The remote islands of Ko Wua Ta Lap and Ko Phaluai harbour small nomadic fishing villages, along with a spectacular viewpoint and a stilted seafood restaurant, respectively. All the park’s other islands remain uninhabited. This makes Mu Ko Ang Thong a treasure trove of wildlife encounters.

The park is home to 16 mammal species, along with 50 birds, 14 reptiles and five amphibian species. Visitors will find dusky leaf monkeys, long-tailed macaques, fishing cats, wild boar, smooth-coated otters and even leopards. With such an abundance of seafood, the park is an ideal habitat for birds. Kingfishers, white-bellied sea eagles, brahminy kites, black baza, oriental pied hornbills, Eurasian woodcocks, pacific reef heron and common hill myna are all found here. The park’s coral gardens are ideal for snorkelling, with hawkbill and green sea turtles and yellow-spotted trevallies a common sight. The best time for diving is from February to October, with visibility at its clearest around March/April.

Mu Ko Ang Thong National Park can be reached in about an hour via the Surat Thani mainland or from Koh Samui by speedboat. Slower ferry-style boat trips are also available, but take much longer and can’t approach as close to the shore.

Maya Bay may be closed for the foreseeable future, but there are plenty of other locations that offer the same scenic beauty. Although Leonardo DiCaprio’s famous film “The Beach” was filmed in Maya Bay in the Andaman Sea, the original book by Alex Garland – upon which the film was based – was actually set in Ang Thong in the Gulf of Thailand. So if you’re looking for the authentic ‘Beach Experience’, Mu Ko Ang Thong takes you there.